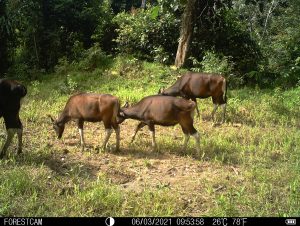 The study will complement the efforts to address poaching and encroachment under the DaMaI Initiative managed by Sabah Environmental Trust (SET) since 2017.  The DaMaI Rainforest Complex Approximately  1.0 million hectares located in the heart of Sabah and is part of the Heart Of Borneo (HoB) Initiative . The goal of the study is to establish baseline data for Bornean banteng (Bos javanicus lowi) and Bornean elephant (Elephas maximus borneensis).

The Bornean elephant, the smallest Asian subspecies, is one of the least-studied elephants in the world. With around 1,500 individuals remaining in the wild, this species is currently threatened by habitat loss and fragmentation, hunting and poaching, and reduced genetic diversity. For this reason, sustainable agriculture and public awareness are among the main priorities to conserve this species. Bornean elephant is classified as ‘Endangered’ under the IUCN Redlist and is listed under Schedule I of the Wildlife Conservation Enactment 1997 as ‘Totally Protected’, which means hunting or possession of parts is totally not permitted.

The Bornean Banteng is an endemic species to Borneo apart from its two other subspecies of banteng in Burma (B. j. birmanicus) and Java (B. j. Javanicus). Banteng are distinguished from domestic cattle by white rump and white stockings and are about 400 – 900 kg. They are previously common throughout Borneo along grassy river banks and in abandoned swidden (hill rice) farms in the interior, widely scattered small herds at Danum, Deramakot Kulamba, Maliau Basin, Malua, Tabin and in Sipitang Sabah. The distributions of Banteng have been retracted to protected forest reserves, commercial forests, wildlife reserve and other unprotected land, i.e. natural forest, native rights and scrubland adjacent to natural forest. Aside from malnutrition, Bantengs with injuries have been recorded across Sabah, ranging from broken poles/horns, punctures, lacerations, eye damage, possible dislocation, and a Banteng with hoof missing that was almost certainly a consequence of being caught in a snare. Internationally, Bornean banteng is classified as ‘Endangered’ under the IUCN Redlist, due to their collective small population and declining trend across their distribution. In Sabah, Bornean banteng is listed under Schedule I of the Wildlife Conservation Enactment 1997 as ‘Totally Protected’, which means hunting or possession of its part is not permitted.